Salvador Santos was born on May 6, 1976. Salvador was raised by blues and rock musician parents. Salvador(Sal) began playing trombone at the age of ten. By the age of 15, Sal was enjoying an active musical career playing at local colleges and touring Europe with American Music Abroad(AMA).

Salvador began playing Bass at the age of 16 and is self taught.

Salvador split his study of music. He attended Boston Conservatory and the New School University where he studied Classical technique and Jazz music respectively.

Sal is currently playing with a rock outfit; The Vanity Framer as well as being a new addition to Resura Arkestra. 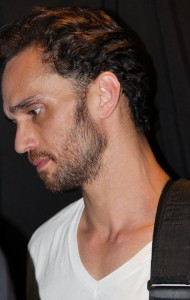