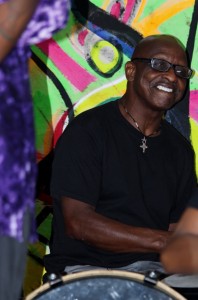 A native of Norfolk, Virginia, Bernard’s fascination with the resounding thunder of the drum set began at an early age. His legacy of playing percussion is rooted in his childhood, where he was the drummer for his church choir at age 9. Bernard reflects on such greats as Elvin Jones and Jazz Messenger phenomenon Art Blakey and attributes Steve Ellington and Billy Higgins as major influences in his style.

While studying at Rutgers University, Bernard formed invaluable and lifelong associations with some of the most respected names in Jazz, including Kenny Barron, Grady Tate, Michael Carvin, Larry Ridley, Paul Jeffrey and Ted Dunbar. A proven and articulate clinician, Bernard served as part of a clinic conducted by the legendary saxophonist Sonny Stitt.

After serving in the Armed Forces, Bernard began another life long association while working with pianist and vocalist Freddie Cole. Bernard credits his foundation for his understanding of the classic standards, swing arrangements, ballads and the art of voice performance to his work with Freddy Cole. Bernard has also performed with such greats as Little Jimmy Scott, Junior Cook, Cedar Walton, Donald Harrison and Abbey Lincoln. Through his energetic yet defined style, Bernard has won many well-deserved accolades in the world of Jazz. His sextet, inspired by Art Blakey’s Jazz Messengers strives for a well arranged blend of straight-ahead, latin and avant-garde grooves.